When sharp minds are fortified by a lifetime of experience, you get a sharp new brand. Welcome to Victory Hooks, where the point has been honed through generations to pierce the past, the present and the future.

One of those keen minds belongs to Terry Hansen, whose passion for fishing, his days as a do-it-yourself tackle crafter, his interest and knack for engineering, his experience developing hooks for Matzuo and nearly 40 total years within the fishing tackle industry have provided him with a warehouse of knowledge, expertise and vision when it comes to the design, manufacture and sales of fishing hooks.

"It all started when I was a young kid," notes Terry. "My five brothers and one sister and my parents, we all went to Minnesota to fish for our vacations."

Terry developed a particular love for the pursuit of walleyes. He poured and tied his own jigs and built walleye rigs. He challenged himself against the top anglers in the country while competing on the Professional Walleye Trail and Masters Walleye Circuit and contiunues to fish smaller tournaments on the Missouri River system.

Terry broke into the tackle industry at Dura-Pak Corporation, which purchased everything from sinkers and snap swivels to spoons and crankbaits in bulk from factories in Korea, Hong Kong and later China and Taiwan. Dura-Pak packaged those products in South Sioux City, Neb., and distributed them around the United States.

"Our ownership used to go to Korea and China and places, and I went along as a young kid," explains Terry. "I kind of learned how to work with the factories designing and developing product where we'd have it made specifically for our customers and bring it into the U.S."

Dura-Pak didn't last, but Terry helped revive the business with the financial support of Maurice Sporting Goods in Northbrook, Illinois.

Meanwhile, that South Sioux City facility was turning out tackle.

That's how Terry met Harry Simmons, another sharp mind with a lifetime of resourceful and penetrating experience. Harry was selling bulk quantities of hooks for Shorty's Hooks in Missouri, and Terry's company needed a lot of hooks. They quickly developed a strong friendship and now they've teamed up to create Victory Hooks, one of several brands under the umbrella of Inception Outdoors.

"He has a relationship with so many customers. Everybody knows him," says Terry. "And Harry's so knowledgeable about hooks, with all those years in the business and all those customers and all the different styles of hooks. I'm the guy who goes to the factories and works with them trying to keep our hooks on spec, setting all the quality control steps, making sure we're getting delivery on time, and making sure they're using everything we've showed them.

"We've been building hooks for a long time, Harry and I," Terry adds. "We're using Belgium steel with our hooks and we're using German heat treat machines. Those are two of the main things in a good, quality hook -- the high carbon steel and the heat treatment."

From penetration, hooksets and their ability to hold fish to strength and durability, Victory Hooks are the cutting edge. They're made from lifetimes to last for lifetimes. 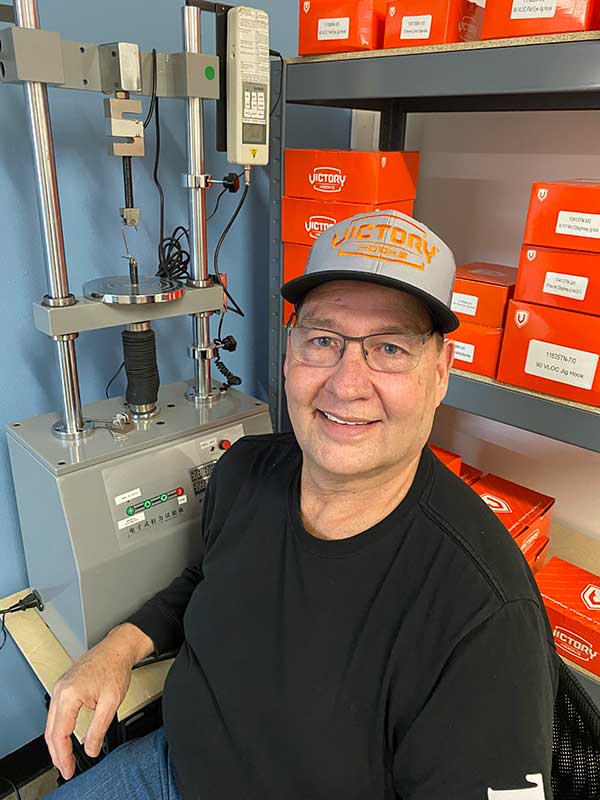